The VARSITY RUGBY Matches at TWICKENHAM

Played since 1872 and held at Twickenham Stadium, the home of England Rugby since December 1921, The Varsity Match is once again set to turn the hallowed turf two shades of blue, as the women and men from Oxford and the other university do battle in this iconic clash. 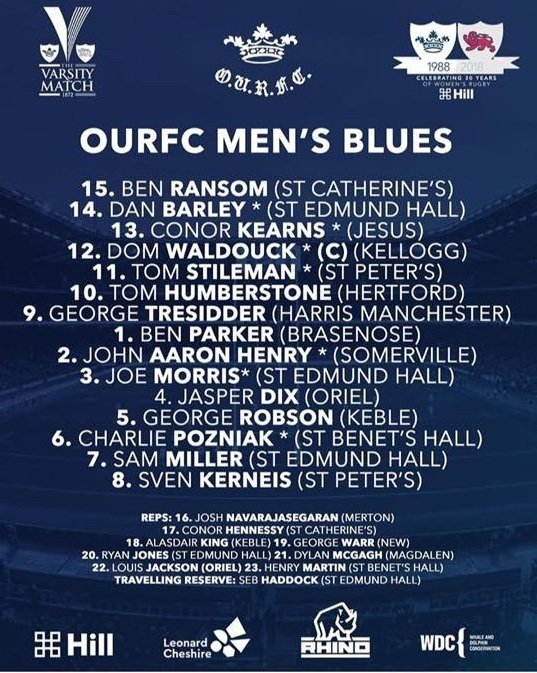 See the team photographs from the R&C Selection Supper, 2018.

REFEREE:        Nigel Owens MBE will add another big rugby occasion to his world record breaking CV when he makes his debut in the men’s Varsity Match. Read more … about the first Welshman to carry the whistle for 105 years!

Seating an impressive 82,000 spectators, Twickenham is the largest dedicated rugby union venue in the world.

A day out at Twickenham is an experience that will not be forgotten in a hurry.

BUY TICKETS HERE or through the club office at Iffley Road, phone Tim Stevens, General Manager, at 01865 432000. You can also book cheap coach tickets, picking up at Iffley Road to Twickenham and return. The coaches return at intervals allowing you to travel back to Oxford immediately or after the game or stay awhile and soak up the atmospere (in the bars!) for a later return.

Despite the unfortunate name, our favourite local pub is the Duke of Cambridge and they correctly boast “WE GUARANTEE WE ARE THE CLOSEST PUB TO THE RUGBY GROUND!” and where we often watch the Women’s Varsity Match. … more ...

What is the etymology of this famous Oxford student saying, it intrigues me?